MSU Federal Credit Union built its own app in 2009 – where is it now?

MSU Federal Credit Union built its own app in 2009 – where is it now?

When you think of fintech innovation, you rarely think of America’s 5,000-institution strong credit union landscape.

But back in 2009, Michigan State University (MSU) Federal Credit Union decided it wanted its own iPhone app.

Benjamin Maxim, who now heads up MSU Federal’s digital and innovation arm, pitched the self-built app idea to his boss.

The majority of this percentage have outsourced their technology. This is because the price and complexity of building in-house is simply too great.

“Others doing it use the same vendor,” says Maxim. “We wanted full control over our digital platforms.”

Maxim was hired in 2007 by MSU as a senior web developer. He has since overseen the development of MSU’s app – which launched in 2012.

The app and its team have introduced features like a peer-to-peer (P2P) transfer service, as well as a shopping cart-style loan application integration.

MSU, whilst it hasn’t outsourced its app, does outsource its core banking system to Jack Henry. It was also one of two first clients to launch the Visa-powered card lock and unlock service, underpinned by an application programme interface (API).

Most recently, MSU launched its fintech innovation centre, which it calls “The Lab”.

“It allows us to ‘play’ and share what we are working on earlier in the process while we are still piloting technologies,” explains Maxim.

He’s spent the last ten months building the programme, which has already produced its own internal start-ups – two of which are gearing up and working on prototypes. 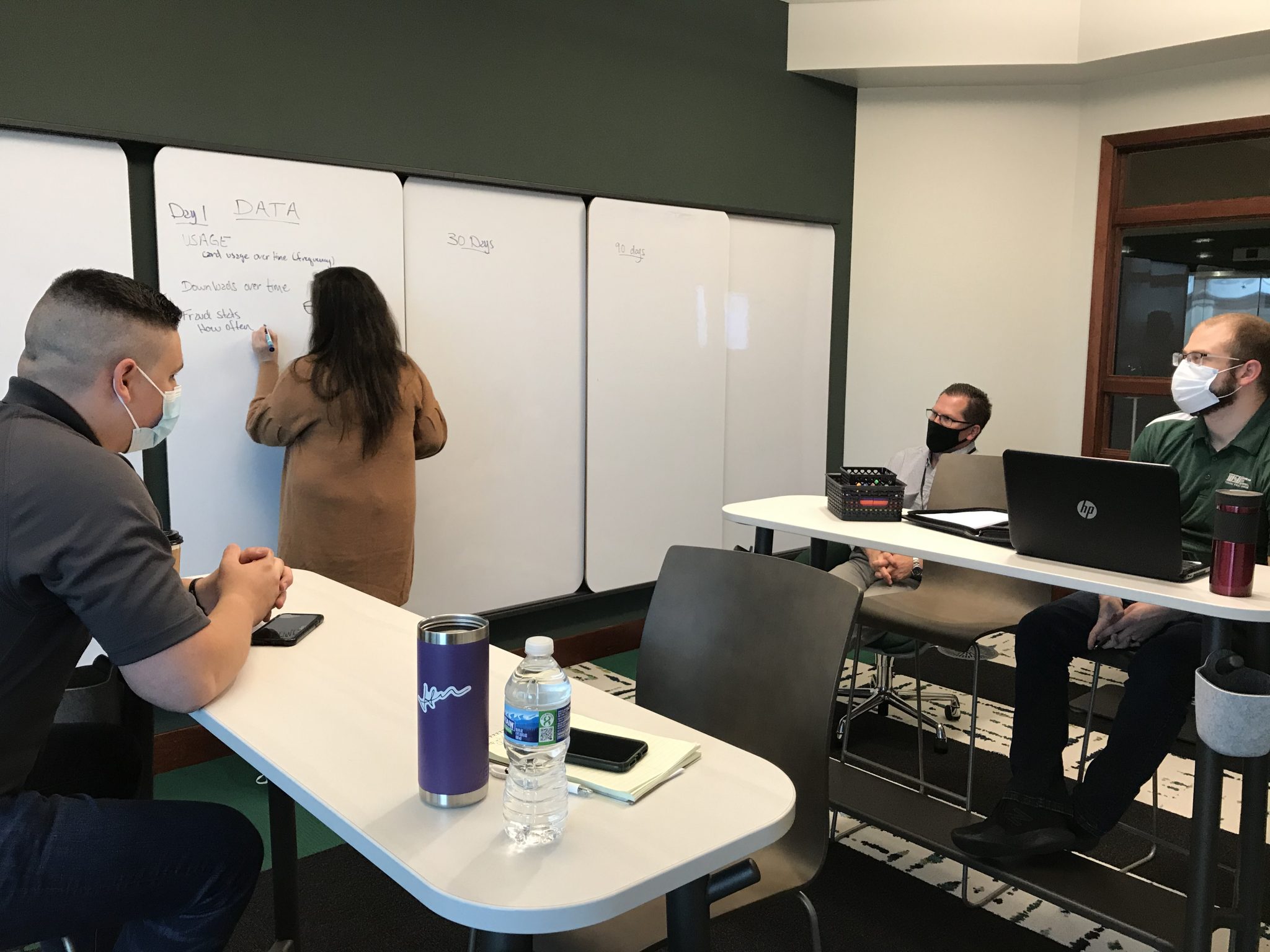 “Our innovation budget actually scaled [during the pandemic],” says Maxim

Each year the credit union says it runs around seven pilots, evaluates upwards of 200 companies, and receives some 26 innovation ideas from employees.

“Innovation was built into our culture since the beginning,” says Maxim, when asked what the credit union’s attitude is to technology investment.

“It comes down to a willingness of leadership – our CEO is a huge driver.” April Clobes has been MSU’s CEO since 2015, having spent more than 24 years at the credit union.

She began building out the firm’s ecommerce strategy as early as 2001.

“When cutting the budget, we saw innovation as how we’ll get through COVID-19,” explains Maxim. “Our innovation budget actually scaled [during the pandemic]. There’s a willingness to put dollars behind it.”

Like most financial institutions, MSU always looks at the return on investment (ROI) for fintech innovation projects. If it breaks even, reduces costs or makes a profit, then the credit union will consider it.

“We use the pilot process to validate a model,” explains Maxim. “If it costs roughly $150,000 to maintain our chatbot each year, we’ll weigh that up against the time spent by our employees.”

As well as growing a number of its own fintechs and self-built products, MSU has also partnered with a host of external start-ups to develop new products.

With around 70% accuracy, Fran had received some 77,730 messages from members as of the end of September.

Boost AI, another fintech, has helped MSU build an internal knowledge-based chatbot. It automates employee-to-employee interactions. “It can automate about 2,000 of these [transactions] a month to members,” says Maxim.

In 2020, some 60% of America’s credit unions believe fintech partnerships are important

He attests that such operational efficiency saves MSU more than $120,000 each year in employee time.

POPi/o is MSU’s most recent fintech partner to go live, having helped the credit union launch its video-based service in August.

Replacing face-to-face branch interactions, the service launched within five weeks of its pilot – spurred on by the pandemic-induced branch closures.

Between August, July and September, MSU has conducted 136 video chats with members – the average time per session totalling to ten minutes.

MSU is also pilot testing with ChangEd, which saves the change on credit card purchases to pay off student loans early.

As well as Pocketnest, a Michigan- based digital financial planner, Keyno, a dynamic card security code fintech, and Exagens, a behavioural banking start-up which is helping MSU increase its wallet share.

MSU is not the only credit union forming fintech partnerships. The firm is part of a group of 72 credit unions – called Members Development Company (MDU) – which shares conditions to pilot new products.

In 2020, some 60% of America’s credit unions believe fintech partnerships are important, according to FinancesOnline data. But as Maxim points out, entities such as the MDU equalise the playing field for those with stricter risk appetites.

“It allow[s] credit unions to participate in a lower risk way without needing all the funds [to pilot themselves] – and they still get to benefit from the fintech.”

Its 72 members represent some $265 billion in assets. Collectively, they serve 16.2 million members.

MDU puts on various events throughout the year which bring credit unions like MSU into the spotlight, so they can share their expertise with smaller or lesser-funded players.