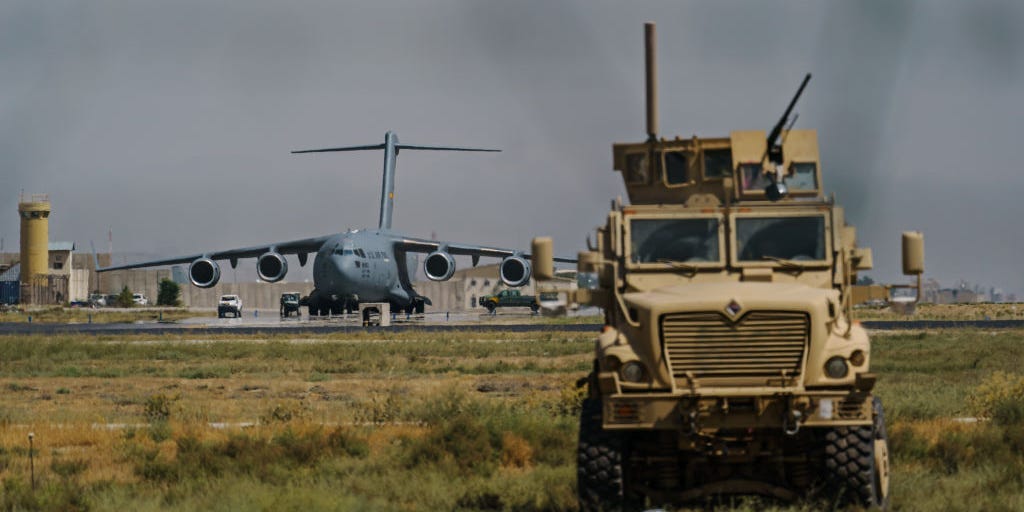 Asked about military equipment left behind at the airport, McKenzie said that some was brought out. Other systems, he said, were “demilitarized,” meaning US forces purposely broke them to prevent them from being used, CENTCOM clarified for Insider.

The counter rocket, artillery, and mortar systems, which were used to fend off a rocket attack on the airport on Monday, were kept online until the last minute and then demilitarized.

“We demilitarized those systems so that they’ll never be used again,” McKenzie said. “We felt it more important to protect our forces than to bring those systems back.”

The general further explained that demilitarized equipment included 70 mine-resistant ambush-protected (MRAP) vehicles “that will never again be used by anyone,” 27 Humvees “that will never be driven again,” and 73 aircraft that “will never fly again.” Many of the aircraft were not mission capable anyway.

“They’ll never be able to be operated by anyone again,” the CENTCOM commander said.

McKenzie added that some systems, such as fire trucks and front-end loaders, were left operational so that the airport could restart operations as soon as possible.

Even if the Taliban, which rapidly seized control of Afghanistan earlier this month in a sweeping offensive, is unable to use the systems the US military did not take with it when it departed the Kabul airport, the group has gotten its hands on working systems.

The Taliban managed to capture an arsenal of US-made weapons and equipment, from rifles to military vehicles, when it overran the country and defeated the Afghan army, which the US has spent billions of dollars arming and equipping.

The Biden administration, which has faced criticism for its handling of the withdrawal from Afghanistan, has acknowledged that US-funded combat capabilities fell to the Taliban.

“We don’t have a complete picture, obviously, of where every article of defense materials has gone, but certainly a fair amount of it has fallen into the hands of the Taliban,” Jake Sullivan, the White House national security advisor, said just a few days after the fall of the Afghan capital.